This week has been...hilarious. There's really no other word for it.


Darran built Ellie and Fiona a nice big pen out by the creek. With this being such a dry year it's the only place that's green and has enough groceries to sustain them. They have lush green to eat, plenty of space to run...it's a goatopia really. 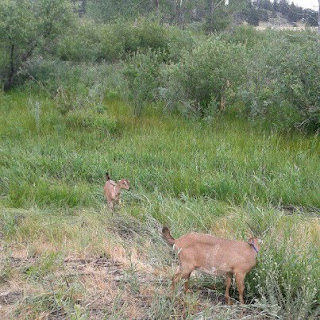 Ellie and Fiona's thoughts on it:

Alrighty then. Moving on...


I was so excited when I had pretty much killed everything else, but my strawberry patch was thriving!! 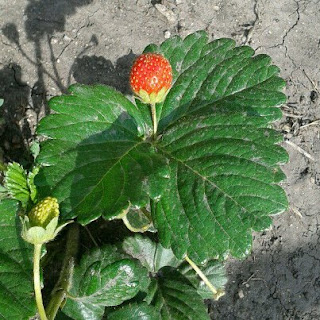 The dang thing is on steroids or something. 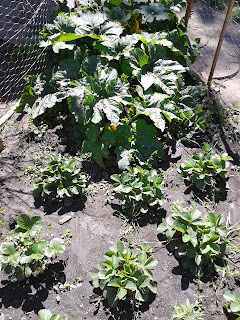 It's completely trying to snuff out my strawberries.

But, I leave it be because with the luck we've had with the garden Darran thinks it may be one of the few things that produce.


So, we'll have tomatoes and pumpkins come fall I guess. Oh, and speaking of tomatoes:
The gate to the tomatoes on the north side of the house has been open for weeks. We figured out that the goats and chickens don't much like tomato plants. In fact, they'll go in and eat the weeds around them. Nice. Anyway, Red chicken doesn't go in there. At. All.


Unless one of us is in there. Then she's right along with you the whole time. Scratching and pecking, rooting around, and just going to town like a kid at Christmas. Then, when we leave, she leaves too. Silly Red.


Oh yes, and speaking of Red chicken! Darran was putting a new door knob on the back door (much to Fiona's chagrin, she had just about figured out how to open the previous lever-type one. I wish I was kidding.) and Red chicken spent the whole time trying to sneak around him and get into the kitchen.

Life is funny. We are grateful.
Posted by Kerri O at 8:54 AM

Welcome. My name is Kerri and I'm a wife, mother, writer, runner, homeschooler, wanna-be-farmer, blogger...I like semi colons and run-on sentences. My life is a crazy hodge podge of bliss: I have chickens and we raise our own beef. I eat paleo and love to workout. I garden and bake my kids' snacks. If they get jam or jelly it's homemade. I am dedicated to being a stay at home mom to my three awesome boys and my social life most days is Twitter-centric. I'm a little too smitten with my Android phone and madly in love with good coffee. I love to run and enjoy challenging myself with races, anything from 5k's to marathons. My house is never perfectly clean and my to do list never complete. Life is good...what more can I say?